“The Morning Glory is a joy every year.  Those enormous sky-blue trumpets that open every morning before breakfast and shut themselves up again between luncheon and tea…You must make sure to get the right kind: it is called Ipomea rubra-coerulea, Heavenly Blue.”
–Vita Sackville-West
In Your Garden:
February 12, 1950

Vita loved her Morning Glories.  Besides zinnias they are the only annual she planted.   She advises that you can sow them indoors in March or April.  However, you don’t loose much time sowing them at the end of May in the ground from which they’ll grow.

She advises,
“Sow the seeds in little parties of three or four, and thin them remorselessly out when they are about two inches high, till only one lonely seedling remains.  It will do all the better for being lonely, twelve inches away from its nearest neighbor.   It will branch and bulge side-ways if you give it plenty of room to develop, and by August or September will have developed a spread more desirable in plants that in human beings.” (V.S.W.; In Your Garden, February 12th, 1950)

The seeds are extremely hard and must be either soaked in water for 24-48 hours prior to planting or I’ve heard people ‘file’ the shell down to expose the tiny plant-this technique made me nervous, and it seems it’d be rather tedious. 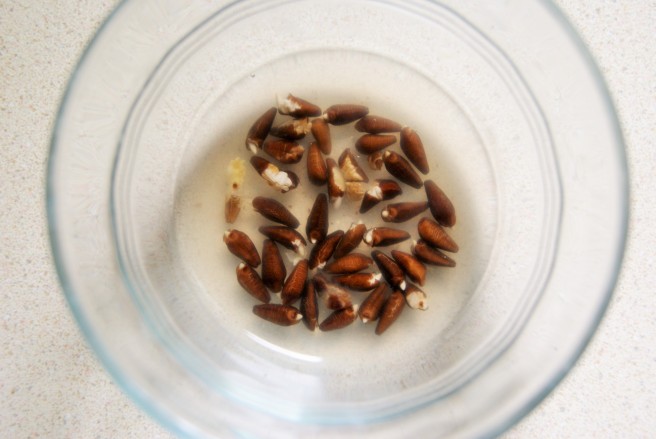 These seeds above were soaked for 48 hours.  The water became quite cloudy, but you can see the tiny plants poking out.   I was going to plant them right away, but then it starting SNOWING.  Fearing they would become water logged if I left them soaking any longer I took them out to dry.  Then I began to fear that drying them out too much might be detrimental to their growth, so I employed a baggie with a wet paper towel and wrapped the birthing babes neatly- leaving them tightly sealed until they were ready to plant (about two days).  The baggie idea just instinctually came to me.  It’s like the seeds were speaking to me or Vita’s influence is taking its toll.  Whatever it was, it worked wonders…

The seedlings grew twice their size!   I planted them yesterday along three trellises and a fence.  If I’m lucky, the blue trumpets will block out the view of our neighbor completely!

Artists have never been able to agreed on the correct shade of blue.  If only they had turned their heads to a trellis of Ipomea!  A blue that goes well with all others, that will never clash or swear.  A blue that seems to be translucent- that shares a touch of all the others.  It is all found in the Ipomea rubra-coerulea!

…And while they grow I’ll think of Vita; how behind her garden gates, unbeknownst to all other artists and the world, she knew she possessed the perfect shade of heavenly blue.

Photo Credit(Because mine haven’t grown yet to take a picture): Wallace Gardens