They used to be regarded as a common old plant, almost a weed, when we grew the type which spread everywhere and was only a pale orange thing, not worth having…

Now there are many fine hybrids, which may come as a revelation to those who have not yet seen them.
They will grow in sun or shade.  They will grow in damp soil, even by the waterside if you are so fortunate as to have a stream or a pond in your garden, when their trumpets of amber, apricot, orange, ruddle, and Venetian red will double themselves in reflection in the water.  They will grow equally well in an ordinary bed or border.  They are, in fact, extremely obliging plants,  thriving almost anywhere.

-Vita Sackville-West
The Joy of Gardening; 1958 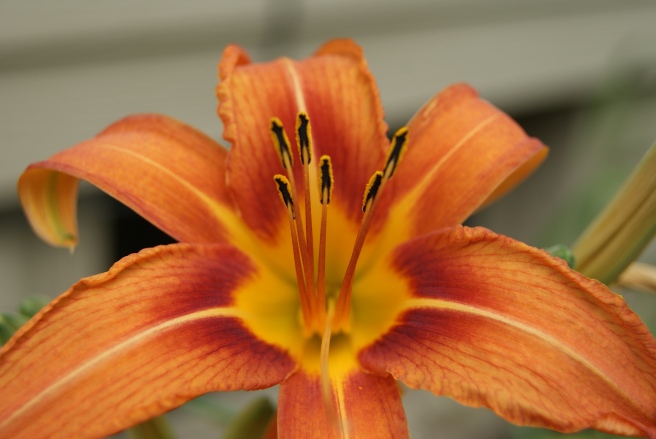 I was more than a little distraught yesterday as I looked about my garden and nothing seemed to be blooming in abundance.  Abundance enough for me to cut a few flowers to use as a center piece for my Father’s Day table.   The Lilacs, I know, appropriately bloom on Mother’s Day.  It’s an easy find because I wait all year for those purple fragrant blooms.  But what for the father?  The roses have taken a little break it seems, and the hydrangeas are not quite there.

Without hope, I rounded the forgotten east corner of our yard and spotted them.  The orange trumpets that live but a day.  I’ll admit it was probably the first time I rejoiced at their sight.  They are too often forgotten by me.  A third rate flower as they seem in my mind.

However, I saw them and remembered years past when I, newly married and exhaustingly playing “Suzy homemaker”, would cut the blooms to beautify my table setting before the flowers shut themselves up for all eternity.

Seemed a waste of energy really.  I almost resented them for their lack of resourcefulness.  But that is nature, it often doesn’t make sense but it is miraculous and awe-inspiring all the same; to exert one’s energy and strive for perfection for just a day; for just a life.

In many ways we are like this.  Preparing a meal for the entire family for this day: Father’s Day past and present.  Us, the hosts and hostesses of the world; exerting all our energy and striving for perfection for just one little party.  Or rather it is like the father who works hard everyday so he can provide for his family.  Is that living?  I say yes.  Perhaps that is our only purpose; to exert and exhaust our energy for one eternal goal: survival for all.

By our old house on the lake, daylilies grew in abundance.  So much so, that now, I truly believe if you hold one of the orange trumpets to your ear you might just hear the sounds of motor boats, jet skies and crashing waves, or perhaps the call of the kingfisher and the wings of swans as they flap across the sunset with their reflections below them.

So with this memory, and a new found appreciation for their hard work, perhaps I will rethink my forgetfulness.  I fixed myself a small bouquet; a rather handsome collection, much like our hardworking fathers.

I have a new appreciation for the Daylily today, like a new appreciation of a father whose obliging qualities are gradually recognized by their ever maturing children.  It is an obliging plant after all.  So, I’ll leave you now with the words of my own father who announced this wisdom as he went off to work every morning: “The Lord loves a working man”. 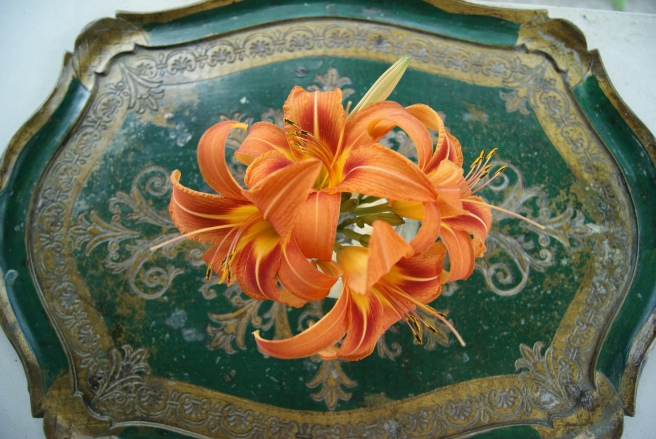 2 thoughts on “The Daylily: “The Lord Loves A Working Man””