It is amusing, and also useful as a record of what to plant now, looking forward to twelve months hence, to make a compact little bunch of what may be found flowering out of doors in this drear empty month.  Prowling round through the drizzle with knife and secateurs, I collected quite a presentable tuzzy-muzzy.

If you’ve read my post What Is A Tussie-Mussie?  you’ll know Vita is referring to a small bouquet of mixed flowers – a sampling of one’s garden.  Now, since the frost has come and gone and come again, it is almost impossible to find any flowers now.  However, there are plenty of spent flowers remaining.  Flowers which stand, brown and suspended on their stiff spikes will make striking displays for drying.  I implore you to take up this challenge and see what you can find out of doors.  It is a wonderful reminder as one hunkers down for the winter to gaze upon the little dried beauties with hope – it is but only three months away.

My mother is quite funny, sometimes she’ll come up with ideas that have us rolling with laughter.   As we sat in the last blaze of summer sun at her cottage we contemplated the coming winter and she vowed, in jest, she would, “defy the seasons”.  She came up with many hysterical instances on how she would do this and we had a good laugh.  However, now it’s getting serious.  It will snow soon!   My mother’s ironic humor resonates and I think she was right; there is no better way to “defy the seasons” than by going out to pick a bouquet of flowers as the blistering icy wind blows.

As you take up this idea and venture out keep your eyes open and use your imagination.  For instance, my uncle once made a sculpture out of our dried sunflowers and their incredibly sturdy stalks.  As for me, for weeks I have passed by a grouping of dried garlic chives on my run.  I soon got it in my head that I must have them.  They were beautiful spikes with balls of delicate seeds that seemed to glisten in the sun.  One morning I asked the owner of the property if I could have some.  He said I could take what I needed.
With the holidays coming or rather in America, we have already begun, sometimes it’s fun to find spent blooms on the more woody stems or perhaps pine cones and spray paint them gold or silver.  They look very good stuffed in a Christmas tree or placed in a table setting.
Don’t be shy.  If you happen to walk by and see, for several weeks, spent blooms which are failing to be clipped, ask the owner if you can take some.  It’s the holiday season after all; a season of giving.  I’m sure they would love to share the wealth. 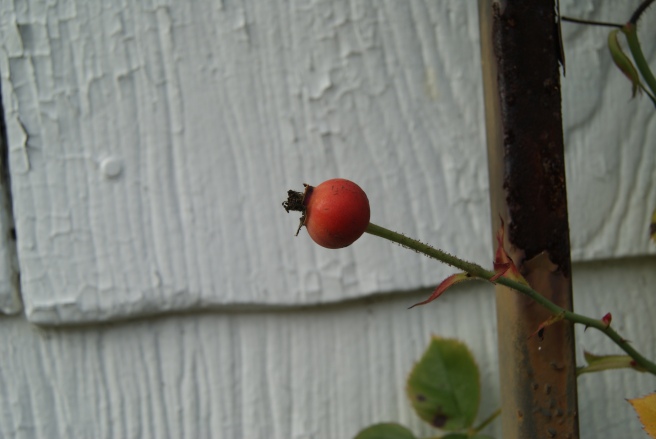